skip to main | skip to sidebar

Some awesome things that have at least a tenuous relation to my Obstetrics and Gynecology rotation:

BBQ fritos: brought on by a severe salt craving at 4am. I decided that since I'd only have about half an hour to sleep, and would wake up feeling worse than before thanks to grogginess, I sat in my call room and read this article. And then raced to the ER vending machine. I think there's some sort of problem here, but I'm not sure whether it's my reading the NY times to stay awake, or my insane suggestibility.

Not fainting at surgery: YAY! Thanks gyne surgery and c-sections! I'm over the evil faints. Also thanks to learning the mighty power of crossing my legs - all jokes aside, this is a good quick way to raise your BP a bit.

Best patient t-shirt: At the antenatal clinic, one of our very pregnant patients was wearing a t-shirt reading "All I wanted was a backrub" right above her gigantic pregnant belly. Amazing.

And, the streets of my town continue to amaze: 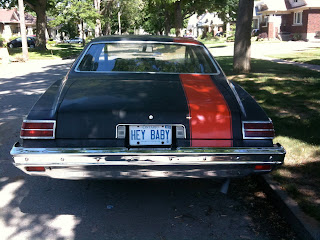 All in all, this has been a pretty great rotation. Hopefully I'll still feel this way after next week's exam!
Posted by Jen at 7:08 PM 1 comment:

I guess I've been busy?

A clarification on the last post: patient breasts are annoying, not my own.

Ok, to fill in the "little gap" between the last post and this one, I'll share a couple of stories.

The first story isn't a story, it's just information. I'm now immersed in something called "clerkship," which is the phase of medicine where someone has decided you've talked enough and now it's time to actually see lots of patients and pretend to be a doctor. Except not at all a doctor, because I'm at a stage where I can't even give some dude with a sore toe an aspirin. Never mind that I'd probably give him ibuprofen instead, and not that he'd listen to me anyways because he's too busy yelling at me about his sore toe to listen. There may have some shouts of "GET ME A REAL DOCTOR." Wow, that did turn into a story.

Other stories/informations:
I still like Family Practice a lot.

Surprisingly, I LOVE Emerg. I like the pace, the rapid exams, the tests, the stitching, the FIXING. It's so nice to see a patient, wonder if an arm is broken, order an xray, see a fracture, and cast it. BOOM we're done. Granted I was working in a community ER rather than in a large, busy ER, but it was pretty great. Also: No fainting when I stitch!

Lately, I've been dictating (yes, I'm now a dictator). By this I mean that I'm speaking into a phone about a patient I've seen, and this all gets recorded and typed up by professional transcriptionists and printed as a neat letter and sent to REAL DOCTORS. In this letter you have to give a concise, coherent story about a patient, what you think is wrong with them, and what you plan to do about it. For me it's actually been pretty nerve-wracking and I spend SO LONG deciding what to say and how I'm going to say it. I have some idea about what is really important and what might be going on, but I am nowhere near confident enough to make a diagnosis most of the time. I've only been doing it for about a week, and it has been getting easier, except for one letter today. I got about halfway done, and then tried to pause the recording. It's funny (not funny at all) how they put the 'pause' button directly beside the 'hang up' button. I ended up having to start again from the very beginning. AND THEN I DID IT AGAIN. So frustrating.

Aside from medicine, I've actually been having a pretty good time in life. I've been trying to spend lots of time at home so the husband and the cat feel loved. I've been seeing family fairly regularly. I've been seeing friends nowhere near often enough. But I've been pretty happy, for the most part. And now that it's sunny and warming up, hopefully I'll keep the good stretch going. Although hopefully with more friends time.
Posted by Jen at 1:04 PM 2 comments:

Frig, I love cardiology. Or rather, the fact that I'm starting to feel like I'm not a total idiot about it any more. My elective is going really well - GREAT preceptor, he's giving me so many opportunities to practice my clinical exams as well as teaching me a lot of new skills. I can now start ECG's, and have a pretty good understanding of at least basic interpretation. I'm learning some more about drugs, and common cardiac conditions. I've even tried to be extra heart-healthy: biking to the clinic every day, more salads, etc. Of course, there are still at least 100000 things I don't know about hearts yet, but this is a good start. Only three days left of this elective, hopefully this new knowledge will last into clerkship and beyond!

On a related note: you know you're a med student when breasts become annoying lumps of tissue that just get in the way of doing a good exam.
Posted by Jen at 6:58 PM 2 comments:

As term is wrapping up, we've been lucky enough to be treated to a few dinners over the past few weeks. Most deliciously, we went to an amazing Brazilian grill place (more about the meal here). While at the restaurant, we were given a little gift - surgical hats (think hairnets made out of scrubs material). Everyone immediately tried them on, and the dude sitting next to me was remarking about how much my classmates looked like surgeons... and then turned to me, and said, "well, except for you. You look like a cafeteria lady!"

Honestly though, it was one of the best burns I've had in a long time... I can't even be offended. He followed it up with a quick "Oh it's just because you're too NICE to be a surgeon!" I hope I'll at least be able to fake the look through my surgery clerkship rotation!
Posted by Jen at 1:21 PM No comments:

A quick update on what we've been learning:

Learning something after all...

I'm at a school that is relatively (in)famous for its lack of formal evaluation. We do have 'tests' every once in a while that help us track our development and performance relative to the rest of the class. I just took one today, my first since the baseline evaluation during the first month of school. After THAT dismal performance, I was expecting to improve a bit, considering that it would be nearly impossible to go down from that score.

My main thoughts during the first test was that there is SO MUCH to know, and how cool is it going to be to at one point, realize that I possess that knowledge. That point is a long way off, but slowly inching closer. I went through all of my old notes, trying to remember about the heart, the lungs, the blood... and realizing over the past day or so that I feel like I've forgotten about 95% of what I've learned about pretty big things (I keep telling myself not to worry because by the time I get to clerkship and residency, all of these things will be drilled into my head for good).

BUT! I surprised myself by scoring TEN TIMES higher than last time. I was answering a lot of questions, and while I wasn't super confident, I managed to remember a lot of stuff. Please keep in mind that it isn't like me to gloat... I tend to feel that in my group of peers, I am on the very bottom rung of the knowledge ladder. I constantly feel like I am more 'lucky' than 'deserving' of my place in med school. But now, for this brief moment? I'm feeling pretty good, and am excited to get to the point where I can answer most of the questions, and be a good doctor.

Now it's time to go get this new self-confidence smacked down with my practical 'evaluation'.
Posted by Jen at 11:29 AM 2 comments:

Taking a cue from Saroja...

a haiku, in lieu of a comprehensive update!

morning in the morgue
avoiding thoughts of pain, death
hiding from disease

(I have a funny relationship with anatomy and anatomy specimens. I find that I'm fine if I focus on the organ... what is this thing, where is it's location, what does it do. Mostly, I'm fine, I can separate myself. As soon as I think: 'what did this pathology do to this person,' I'm done. I need to sit, gather my thoughts and breathe... hard to do in a poorly ventilated, tiny room surrounded by formalin odors. I'm getting better though, it's a good place to learn how to remove myself from my emotions. I still have a long way to go.)
Posted by Jen at 11:43 AM 2 comments: